Given birth to, set the table and  fed a nation.  We have fought in wars; domestic and

We hold down jobs, bring home the bacon (cook it) and raised families.

We have sacrificed our health and well-being so that others may thrive.

We have learned from our experiences and we, the women survive.

Nor  do we pre-judge a person by age, the color of their skin, religious beliefs or sexual

We  know every human has worth.

Work to ensure our government is reflective of all the people it serves.

We must step up and become those people in every level of government.

Women take a seat at the table.

What is our responsibility for the well-being of others? Is it possible for us to live in harmony with those who don’t share our religious or social beliefs? At a certain age the call to answer universal questions becomes harder to ignore or place in the hands of those we believe are a bit smarter or more powerful.

Among the more pressing involves the legacy we leave our children and defining the care and respect we must focus on our elders, people with disabilities and those who have been beaten down simply because of the color of their skin or country of origin. In a perfect world— a hard day’s work is enough to finance a family’s basic needs with more than a few dollars left over to educate our kids, take an occasional vacation and set aside for a rainy day. But in the real world the rain never seems to stop.

Many Northlanders live pay check to pay check and shop for bargains at big box stores or the local dollar store. When the check doesn’t stretch ’til the end of the month… a visit to the food shelf is the only thing preventing a child from going to bed hungry. While many of us work hard to make ends meet with an ever shrinking dollar—- foreign interests and powerful corporations reap the rewards provided by hard workers in the Northland. The power of the “one percenters” continues to grown as they  grow richer. Sadly while we focus on work—the strength of our unions is also being chipped away along with the power of our voices. Redistricting, voter suppression and apathy have tipped the balance of our representation in Washington in support of a Republican Party it’s founders would not recognize today. Choosing to exercise our vote for either party seems an exercise in disillusionment.

In our hearts we know building a wall is not the answer—nor is demonizing others. We question whether proposed tax cuts will really help the average Northland Family and why the majority in Washington seems relentless in its effort to weaken our current health care system (the backbone of rural health care.)

Our foot soldiers in the battle for justice and the war on poverty grow weary, beaten down by those who argue— giving a hand up or creating an even playing field—gives rise to socialism. Struggling to redefine itself— the Democratic Party must also take responsibility for the situation in which we find ourselves today. Inspired as a kid by President John F. Kennedy I’ve always thought of myself as a Democrat.

I’m not ready to give up that thought. But I know the party of my youth can no longer conduct business as usual. It too must redefine itself as the party of new ideas; one willing to boldly fight the opposition on its terms—quarterbacked by new leadership with convictions mirroring its members. It must be done quickly.

Faced with the probability of multi-million dollar mid-term campaigns, lack of money in the high stakes game of politics must not be a barrier for qualified leaders of the future. Nor should our gender, sexual orientation, race or religious belief.

Some new friends  recently told me I was brave for sharing my social and political opinions in light of the backlash they are seeing  on social media.  The anonymity of tapping away a response to a Facebook or Twitter post has emboldened some to attack those with an opposing viewpoint. As a result, these friends have stopped posting their personal views. 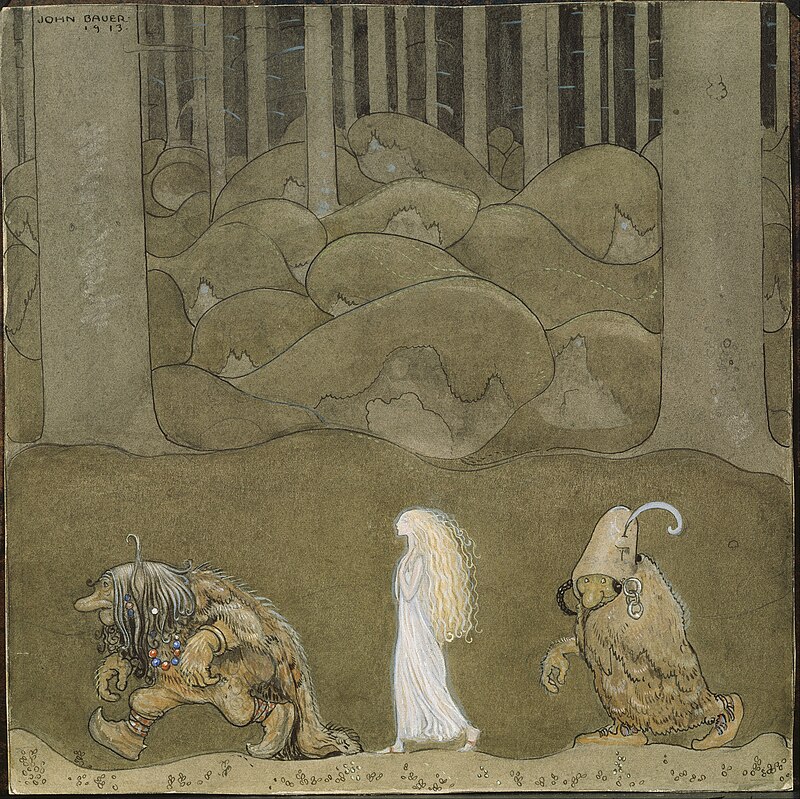 The Princess and the Trolls –The Changeling, by John Bauer, 1913.)

I get it…trolls are often hurtful, and in many cases fail to make a point without harsh and often nasty comments they would never verbalize in a face to face conversation.

Checking my Twitter notifications I find I now have a troll. I considered whether to share this comment because it would give this person the publicity or recognition that they seek. In the spirit of free speech I decided to share one of those comments here.

I will spare you the more nasty ones.

The thing is, we cannot allow others to silence us or to prevent us from having a meaningful dialog with those who may not agree with everything we believe it.  My goal is to find a list of common issues and possible solutions that we can all agree and act upon for the sake of our country.

Growing thick skin can be painful…but we must stand strong and resist the effort by trolls to silence our voices.

After hundreds of thousands of women marched on Washington, many questioned whether it was a moment or a movement.

One of my moments came in the middle of a crowd of strangers  as I stood next to the Hubert H. Humphrey Building.  As dozens of young adults were pounding out a beat on five gallon pails  and elders joined in to chant against injustice –my emotions got the best of me.  I stood very still in the middle of this empowering crowd and let go of my tears.  At that moment I knew in my heart the resistance had begun and I would be a part of it.

Our moments will sustain the movement that brought together millions of women, men and children around the world on January 21, 2017.

What is happening in Washington DC is no longer simply a matter of politics.  When the top US Senator shutdowns another senator for reading the words of an honored civil rights leader we must condemn his action.

When nominees are unqualified for the top jobs in our country we must question them and pressure our representatives to put aside politics in favor of our country.

I live in Minnesota a great state with deep roots in the Democratic Party (Democratic, Farmer and Labor) tended by such great Americans as Mondale, Humphrey and Wellstone.   I count among them, Klobuchar, Franken and Nolan now serving Minnesotans.

Growing up I was taught to respect others, love my neighbors and work for the common good.

The events unfolding in Washington under our new administration is cause for alarm. The current leadership seems determined to claw this nation back to a time when labor had little power over corporations.  A time when women were muzzled and held few rights— and a man’s character was measured by his skin color –and the right to love the one you love was locked away in a dark closet.

It is time we stand up for America. It is time that we huddle to develop a game plan. Our country’s future and our way of life needs to be defended.

Here is an invitation from the Women’s March Organization;

During the first ten days of Feb, we gather together in our neighborhoods all over the world to define our next steps, and envision how to transform the energy we saw at the Women’s Marches into local and national action.  Find a huddle near you and bring your ideas!

Here are the sights and sounds from the Women’s March in Washington, Jan. 21, 2017.  Madonna’s speech  Next stop, the League of Women Voters event at the Copper Top Church on Saturday.

On Friday morning I will get on the bus for a long trip to Washington D.C. to participate in the Women’s March.  I look forward to finding my voice after a long career as a journalist.

For 40 years I have refrained from voicing my opinions  on the stories I  covered as a journalist. I lived by a simple rule shared by thousands of journalists; find the truth and tell the truth –in a fair and unbiased fashion.

I left my position as a television news anchor and reporter in Duluth, Minnesota at the end of 2016.  I am  now eager to find my voice, develop my skills as a community activist and learn how to support the issues that I feel are essential to maintain our hard fought rights and freedoms.

On election night 2016 I reported in a fair and un-biased fashion the results of the presidential race while holding  back my personal feelings. Now for the first time in decades I am free to share with your that my heart was broken that night.  When I woke up the next morning I was praying that the outcome of the election was just a bad dream.  But the reality remains that Mr. Trump will be sworn in as our 45th President on the same day I will find myself on a bus with dozens of women traveling to our nation’s capitol.

A Trump presidency scares me, the current majority in congress scares me.  As a woman and a mom my fear is not for myself.  My fear is reserved for our future generations and my friends and family who are being threatened with the loss of health care.  I fear the loss of the right to  marry those we love and for our fragile environment  balancing on a razor’s edge.

Fear is a great motivator.  I will use it to find my voice.

This is a text widget, which allows you to add text or HTML to your sidebar. You can use them to display text, links, images, HTML, or a combination of these. Edit them in the Widget section of the Customizer.